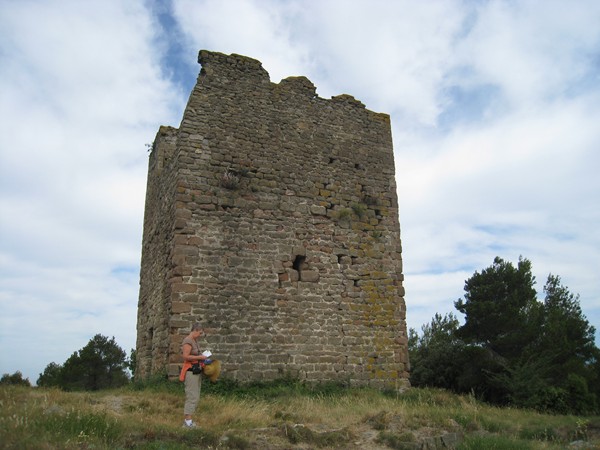 Walk or bike through mountains, vineyards, and the paths of the Canal du Midi 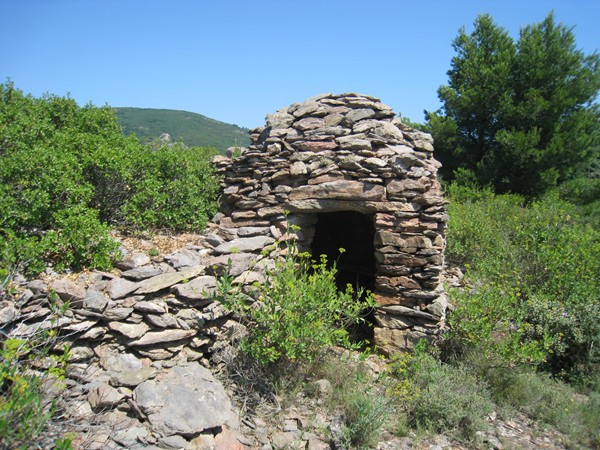 Seemingly endless hiking trails wind through the Black Mountain, Alaric Mountain just south of the river Aude, the Corbières hills and the ranges of foothills that rise toward the Pyrenees. Information on local hiking trails can found at any Tourist Information point, or in the Maire of most towns. Many towns and villages maintain their own trails, and post prominent signs to direct you, often with detailed maps. The Institut Geographique National (IGN) publishes excellent 1:25,000 scale topographic maps that show every trail, farmhouse and menhir.

The hills of Languedoc are full of signs of a much-larger rural population - miles of carefully-laid drystone walls, occasional capitelles (rock huts) once used by shepherds, and ruins of stone houses and barns. The country population crashed following the losses of World War I and the subsequent influenza epidemic; the survivors moved to cities and towns, and the agricultural system focused on wine. Occasionally one comes across structures far older: menhirs (standing stones), dolmens, or larger collections of ruins from the paleolithic to the Bronze Age.

Trails around Caunes Minervois (see a trail map) often lead to or through marble quarries, which have been active in the Black Mountain since Roman times. The roar of heavy shovels and cranes indicate that some are still active today. Many older excavations can also be found, including several along the river Argent Double from which Bronze-Age artifacts have been recovered.

Mountain roads and most trails are passable on velo tout-terrain (VTT - mountain bikes) but brief portages may be necessary for rough stairs or water crossings. We hike in Teva®-style sandals or light trainers; some of our friends prefer lightweight boots. Always carry water. 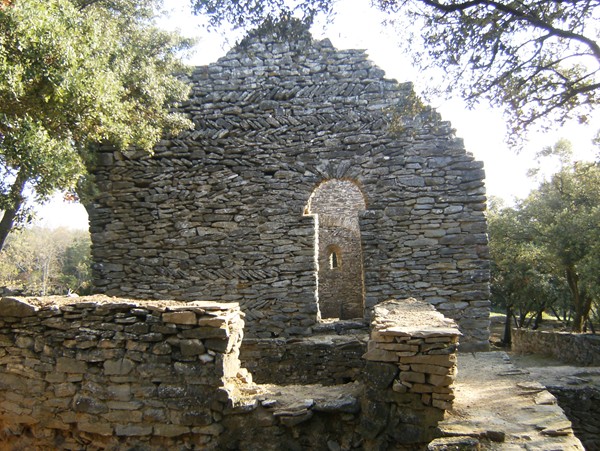 A favorite low-land hike leaves the one-lane D335 just north of the village of Villarzel-Cabardès, runs briefly east toward Laure-Minervois, passing a lovely private chateau, and north and then west to visit the remains of a Visigoth-era church and a touching Visigoth graveyard. Visigoths settled in Languedoc following the sack of Rome in 410, and by the early 6th century ruled much of Spain and Southern France. Alaric Mountain, not far south of the trail to the graveyard, is named for the Visigoth Alaric II who ruled until 507. Standing in the little cemetary, with its stone-lined graves arranged in what must have been family groupings of adults, infants and children, it is hard to maintain the common image of the Visigoths as ruthless, ravaging barbarians. In this quiet countryside they appear to us as villagers, probably herders and small farmers, living as people have lived in these valleys in all centuries until the most recent. 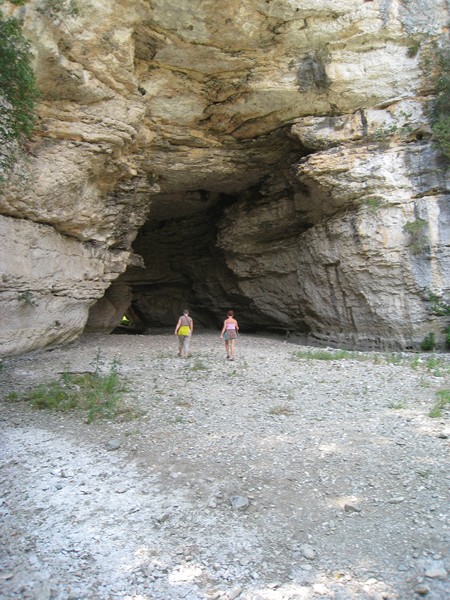 For an unusual subterranean experience, visit Minerve and follow the well-marked route through the village down to the bottom of the Canyon of the Cesse. From there, follow the "natural bridges" signs toward the huge opening under the road you drove in on, and through this enormous cavern on up the canyon. The Cesse flows mainly underground in this part of the canyon, although some wading may be necessary if it's rained recently. Rock shelves that would make easily-defended campsites line the cavern walls; water drips steadily (and sometimes pours) from crevices high in the roof. Merry-makers have arranged stones into hearts, their initials and various arcana on the cavern floor. A hundred meters or so from the exit, a second opening beckons; the twisting channel through this second cavern is sometimes dry, but we have encountered it filled with water well over our heads. Fig trees dangle incongruously from the cavern ceiling near its exit; weathered stumps of limestone stalactites grace the interior. More caves and openings line the sides of the canyon, many large enough to enter, some with open chimneys extending upward through the soft rock toward the plateau above. 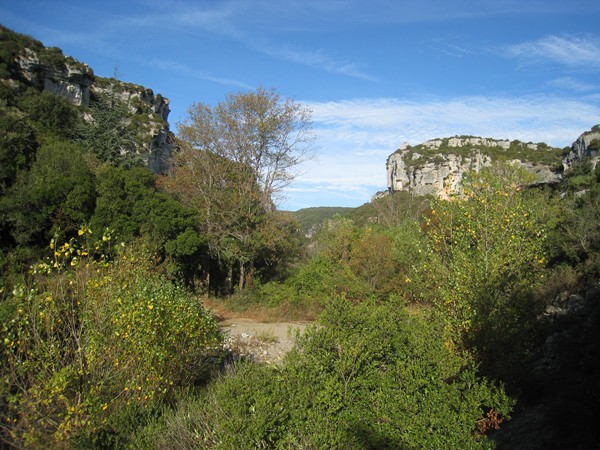 The Canyon of the Cesse winds for miles into the Black Mountain; trails descend to the canyon floor from the D10E1 and D182 west of Minerve and the D147 north of Minerve. In spring the canyon is full of flowers; in all seasons it flocks with birds. Most tourists do not penetrate even to the second of the caverns below Minerve, so it is easy to be alone. Caves and huge abri (openings) mark soft limestone walls at all levels; surely whole troglodyte societies must once have flourished here! Abandoned water mills give evidence of more recent habitation. Often the river is underground, but as in any canyon, beware of upstream thunderstorms that could unleash flash floods.

Above the canyon, especially to the north, stretch miles of tumbled causse, ragged scrublands with thin soil, almost impenetrable dwarf oak thickets, and sharp-edged limestone outcroppings. Dolmens, cairns and stone circles hide in the thickets, as do mysterious, deep, arrow-straight fissures in the exposed plates of rough limestone. Travelled roads are few and far between, so carry a good map and plenty of water when hiking up here. Some of the trails are established VTT routes; these are marked every few hundred meters by green metal cylinders with Herault departmental insignia. 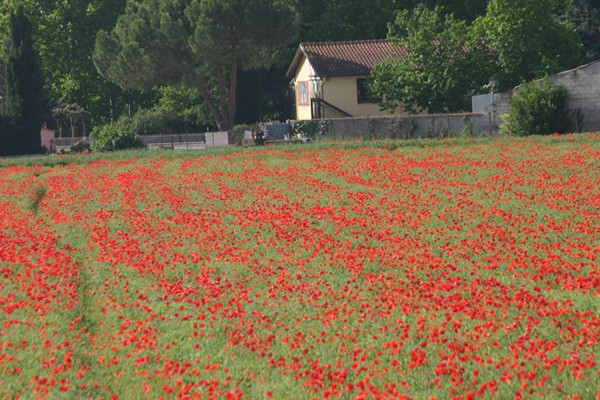 The valley of the river Aude, between the Black Mountain to the north and Alaric Mountain and the Corbières to the south, is a lazy expanse of villages, vineyards, rolling hills and fields of wheat, sunflowers, and red poppies. Country roads, farm tracks and footpaths wander through this idyllic countryside in a dense network - after all, villages are usually only a few kilometers from each other, and farmer's fields are often a hectare or less. Virtually every village has a restaurant or café, so refreshments are easy to come by. Many have charming B&Bs or gites if you're planning a multi-day trip, or if you get somewhere and don't feel like going back just yet. Either by foot or by all-terrain bicycle, all you have to do is pick a direction and head off! 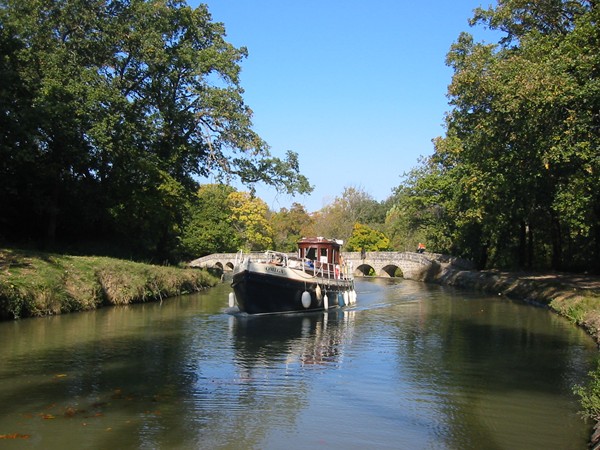 The most relaxing hiking or biking in the area is on the centuries-old towpath of the Canal du Midi. Here you simply drift along under the stately plane trees, making hardly more effort than the folks lazing on the decks of the ubiquitous canal boats. The towpath is absolutely flat except for the locks, and if you walk or ride toward the sea, the locks all go downhill. Even the uphills are only about 4 meters of climbing per lock, usually with a gentle slope. Canalside villages are generally hopping with cafés and activities, at least in the boating season. You'll need an all-terrain bike to bounce over the thick roots of the plane trees, slide through occasional spots of mud, or splash over spillways that may be a few centimeters deep with water. But there's no way to get lost, and if you decide you want a break, the next village is probably just a few minutes away.