Explore the moving and romantic monuments of southern France 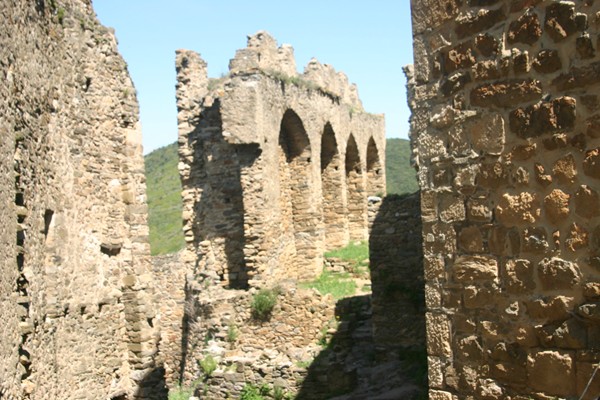 Lastours: The four Châteaux de Lastours are the closet medieval castles to Caunes Minervois, about 20 minutes away via a gentle road through the vineyards. These survivors of a distant era provide a fitting introduction to the turbulent history of Languedoc. Three of the four stood as bastions of the Lords of Cabaret, allies of Carcassonne and Toulouse during the infamous 13th-century Crusade of the Catholic Church and the French monarchy against the Cathar religion and the independence of Languedoc. The Cabarets withstood seige after seige, surrendering to Louis IX only after the final capitulation of Toulouse. The current castles were rebuilt at Louis IX's orders, with his own "Tour Regine" joining the previous strongholds guarding the ridge. They served as military posts until the French Revolution in 1789.

The Châteaux de Lastours are accessed from a Visitors' Center in the village of Lastours. The hike up to the ridge from the Visitor's Center is short but steep. Once on the ridge, one can wander the castles, the partially-excavated remains of the former iron-mining village of Cabaret, and their surroundings at will. The ridgetop provides lovely views of the Orbiel river canyon to the northeast and the hills descending toward the valley of the Aude. There is no protection from rain, but on a sunny day the courtyard of Surdespine Castle is a fabulous picnic spot.

How to get to the Châteaux de Lastours. 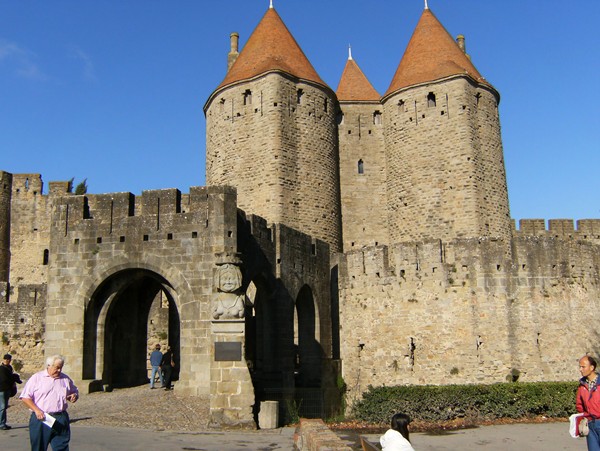 Carcassonne; The fortified hilltop Cité of Carcassonne was built by the Romans on the site of an earlier oppidum (hill-fort), and expanded in Medieval times into a bustling regional capital, home of the Viscounts Trencavel. It was taken by seige early in the Crusade against the Cathars, and its inhabitants expelled. The current city of Carcassonne, across the river Aude from la Cité, was built by Louis IX after the Crusade.

La Cité served intermittantly as a military fortress until the 17th century, and would have been demolished as a ruin had French architect Eugène Viollet-le-Duc not interevened with a restoration plan that appealed to Napoleon III. The restoration, which some even then regarded as a bit fanciful, was not completed until 1913.

Plan to visit La Cité in the off season, or early in the morning to beat the crowds that arrive when the trinket shops open at 10:00. Note the variety of building materials employed in the walls, from typically-thin Roman bricks and rubble to massive finely-dressed stones. Imagine the clatter the iron portcullis must have made when it slammed down between the towers of the Porte Narbonnaise. Contemplate the Cathar history of this town when you notice the sign near the main entrance to St. Nazaire church that reserves it to the "Culte Catholique." 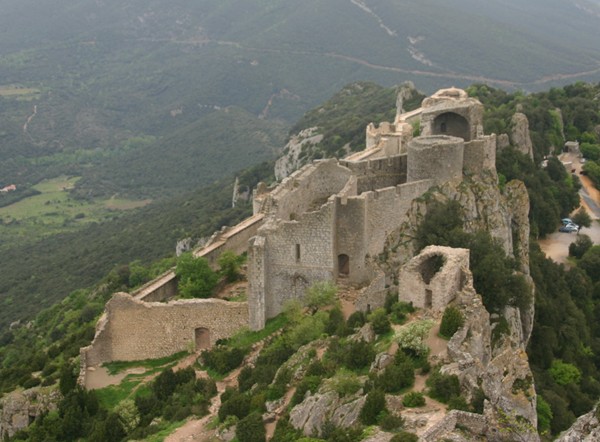 Duilhac-sous-Peyrepertuse: It is hard to imagine how a Medieval army could possibly have conquered massive Peyrepertuse, built onto a spine of rock between deep river valleys. In fact, none ever did. The castle was surrendered twice during the Crusade against the Cathars, both times without a fight, but was not garrisoned or effectively controlled by the French crown until the 1240s. It then served as a fortress against the Argonese and the Spanish until the border was finally settled in 1659, and was not totally abandoned by the military until the Revolution.

One cannot visit a place like Peyrepertuse without imagining the hardships of everyday life in such an isolated and windswept fortress. Winters must have been bitterly cold, and forays for food and firewood difficult and long. The wind is constant, and lashing rain never seems far away. Even in the summer, living up here was no holiday; if the rock cisterns ran dry, just obtaining water would have required a hike to the valley below, and a serious haul on the way back up.

Peyrepertuse is in the southern Corbières, an hour from Narbonne or 30 minutes from Perpignan. Follow signs from the D14 just outside the village of Duilhac to the parking lot, which is high on the ridge below the castle. The castle may be closed on days with severe wind. 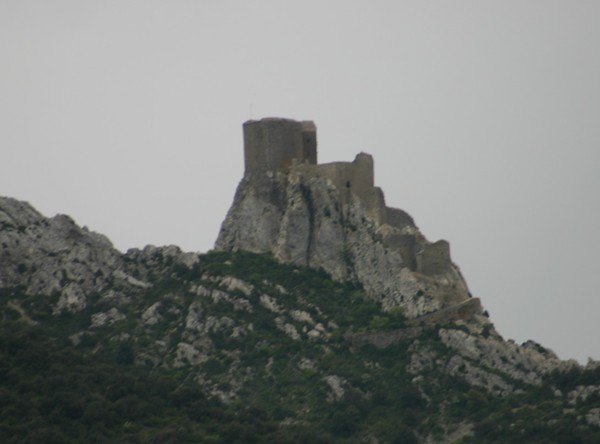 Cucugnan: Grim Queribus Castle rises out of a seemingly inaccessible tower of rock on the southern-most ridge of the Corbières, overlooking the valley of the Fenouillet toward the Pyrenees beyond. Long a Cathar stronghold, it served after its surrender to Louis IX as a French observation post and bastion against the Argonese and Spaniards.

Queribus is accessed by a winding road that leads from the D123 to a parking lot below the Castle's northern walls. A short but steep trail leads to the entrance gate. Sunny weather is rare here; bring a sweater, and be prepared for sudden rain.

The little town of Cucugnan lies in the deep valley of the river Verdouble, half-way between Queribus and Peyrepertuse. Stop at the Auberge de Cucugnan, in the center of the village, for an excellent lunch of duck or wild boar.

How to get to Queribus and Peyrepertuse. 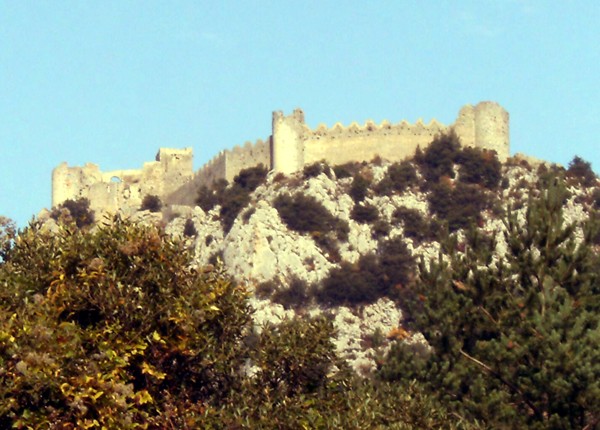 Puilaurens: Mighty Puilaurens guards the western end of the Fenouillet valley, just south of the current D117 Highway. Perched like the other border castles on a massive spine of rock, Puilaurens was never taken by assault or seige. Puilaurens is only slightly smaller than Peyrepertuse, and its walls and the buildings of the keep are in better repair. Its relatively spacious living areas suggest that Puilaurens may have been designed for occupancy by more than just its guard of 25 sergents, but the cunning placement of its arrow slits shows that defensibility was the main architectural concern.

A pleasant, pine-shaded picnic area flanks the visitor's center at Puilaurens. The twisty little D22 leading south from town provides a slow but very scenic alternative route to Ille-sur-Tet and the Roussillon coast.